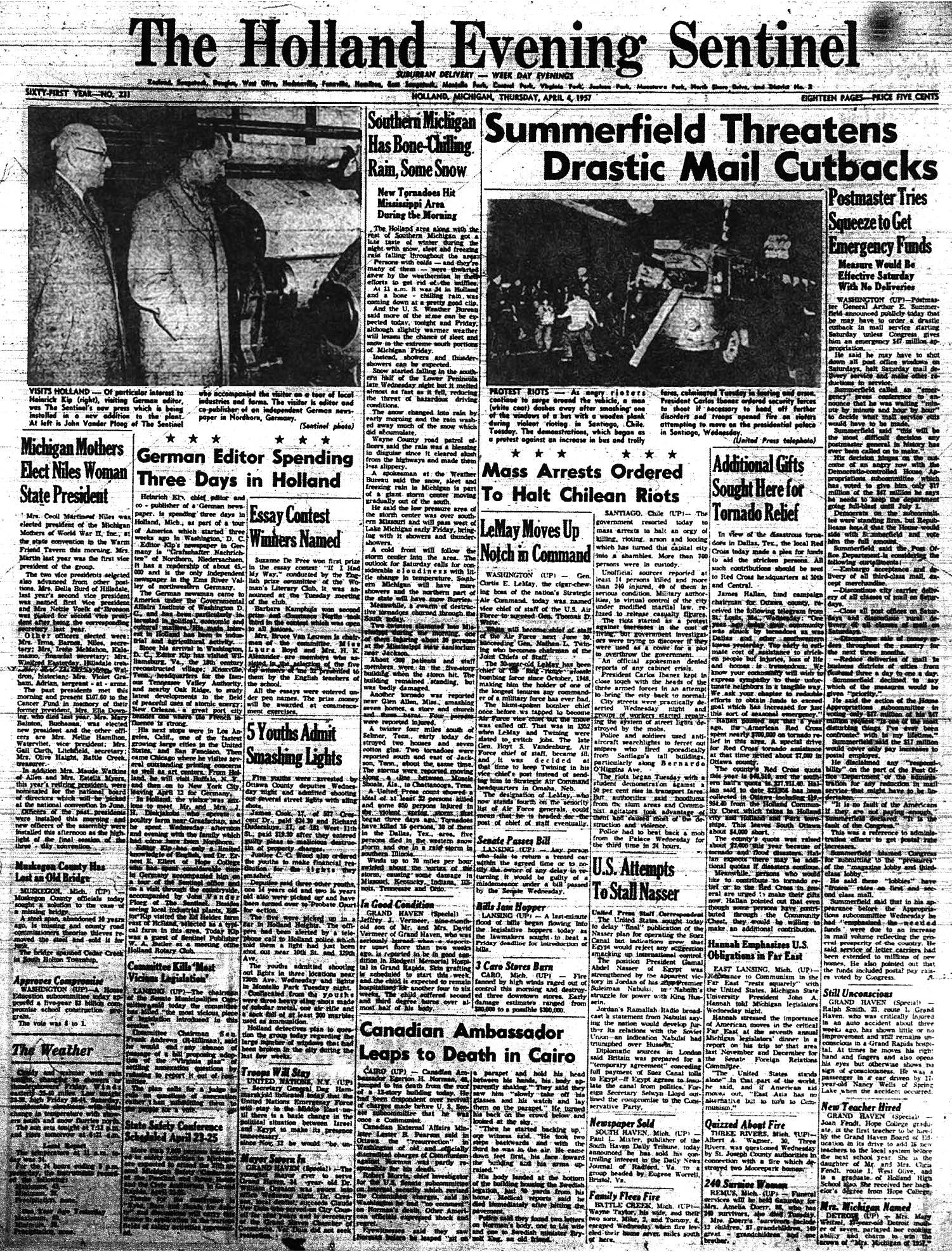 
Heinrich Kip, chief editor and co-publisher of a German newspaper, is spending three days in Holland, Mich., as part of a tour of America which started three weeks ago in Washington, D.C.

Editor Kip’s newspaper in Germany is „Grafschafter Nachrichten“ of Nordhorn, Niedersachsen. It has a readership of about 45.000 and is the only independent newspaper in the Ems River Valley of northwestern Germany.

The German newsman came to America under the Governmental Affairs Institute of Washington, D.C., and has been particularly interested in political, economic and cultural matters. His main interest in Holland has been in industrial and agricultural activity.

Since his arrival in Washington, D.C., Editor Kip has visited Williamsburg, Va., the 18th century reconstructed village; Knoxville, Tenn., headquarters for the famous Tennessee Valley Authority, and nearby Oak Ridge, to study latest developments in the field of peaceful uses of atomic energy; New Orleans, a great port city besides one where the French influence ist strong.

His next stops were in Los Angeles, Calif., one of the fastest growing large cities in the United States, and San Francisco. Then came Chicago where he visited several outstanding printing concerns as well as art centers. From Holland, he will visit Buffalo, N.Y., and then on to New York City, leaving April 12 for Germany.

In Holland, the visitor was anxious to meet Mr. and Mrs. J.H. Diekjakobs who operate a poultry farm near Graafschaap, and he spent Wednesday afternoon and evening with the family which had come here from Nordhorn.

Editor Kip has only a limited knowledge of English, and Dr. Ernest E. Ellert of Hope College who has spent considerable time in Germany accompanied him on a tour of the Sentinel office and on a visit through the countryside, accompanied by John Vander Ploeg of The Sentinel. Besides seeing local industrial plants, Editor Kip visited the Ed Helder farm east of Holland, selected as a typical farm in this area. Today Kip was a guest of Sentinel Publisher W.A. Butler at a meeting of the Holland Rotary Club.